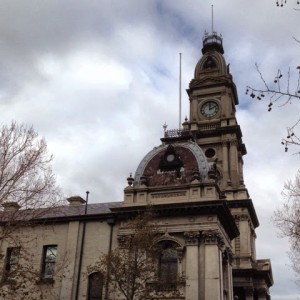 As some of you probably know November 2014 marked the centenary of a significant landmark for Victorian Councils.  It was in November 1914 that the law changed and women for the first time were enabled and entitled to stand as candidates for local Victorian councils. The Collingwood Historical Society worked with the Australian Local Government Women’s Association (Vic) and the Victorian Local Government Association to ensure that they had all the relevant information and photos about Collingwood Councillors.
Collingwood’s first woman Councillor was Rebecca “Rita” Jamieson who was elected in 1964 and we have been researching her life.  The results of that will be included in our Notables project.  Those of you who attended our tours of the Collingwood Town Hall earlier in the year will also have heard about one of the other results of this research. Due to representations from the Society, the Yarra Council agreed to name one of  the meeting rooms at Collingwood Town Hall the “Jamieson” Room.  This was a fitting tribute for the 30th anniversary of the first woman elected to Collingwood Council as well as for the centenary of women standing for Council.
But did you also know that the former City of Collingwood had SEVEN women Mayors and NINETEEN women Councillors? Whilst Rita served in solitary splendour as the only woman on an otherwise male Council and her successor Caroline Hogg started her life as a Councillor in the same way, Caroline was soon joined by Solange Shapiro and after that female Councillors were always present and a force to be reckoned with.  The names of the  female Mayors and Councillors follow.
Mayors
Councillors in date of election
As part of our research into these Councillors, we have also been trying to track down photos and bios. We now have photos of all the Mayors and most of the Councillors but if any of you have any photos we would love a copy of them.  And we would also be interested in hearing from any of you who have any stories about these women or know what they did after they left Council.
If you have any info, you can email here.
Thanks in advance for any assistance you can give with this project.