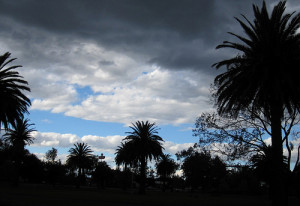 Mayors’ Park in late afternoon 52/10/2, a photo by Collingwood Historical Society on Flickr.

This photo of part of the Flickr Friday Photos 2012 group under the theme “Green”.

Like the previous reserve, Raines, Rain’s or Raines Reserve, this nearby Reserve has also suffered from spelling aberrations. It appears these days in Melways and Google as “Mayors” Park. But in the 1897 MMBW map it appears as Mayor’s and for some reason I had always thought as it was celebrating Mayors of Collingwood that it would be Mayors’ but maybe it was meant to celebrate the Mayor of the day only. The Park appears in the 1869 de Gruchy map as Mayor’s Park and appears always to have been allocated as a reserve.