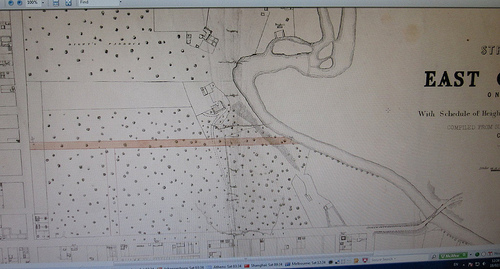 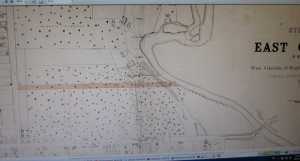 Through Hodgkinson’s eyes in 1858 52/8/1, a photo by Collingwood Historical Society on Flickr.

This photograph is part of the Friday Photos 2012 group under the theme of “Eyes”.

This map of Collingwood was drawn in 1858 from surveys undertaken by Clement Hodgkinson after whom Hodgkinson Street Clifton Hill is named. Can you recognize what he saw? On the right (eastern) boundary of the map is the Yarra River. Towards the top you can see the confluence with Merri Creek which is very different from what you see today. That confluence was moved during the construction of the Eastern Freeway in the 1970s. But you can see Dight’s mill near the confluence and remnants of that are still to be found today near Dight’s Falls.

The road on the western (left) boundary of the map is Hoddle Street and the wooded area between Hoddle Street and the Yarra is bounded on the south by Johnston Street. That wooded area now includes the railway line and Victoria Park Station, Victoria Park, and many houses and other buildings. Today Trenerry Crescent runs north to the east of this map from Johnston Street around past Dight’s Falls and under the freeway to Clifton Hill.

This is only a small section of the Hodgkinson map. If you would like to see more of it and compare other parts of Collingwood he saw in 1858 get on over to the Collingwood Historical Society website Maps Online section. You will find this map and a range of other maps of Collingwood.

Looking at Collingwood through the eyes of someone living in 1858 certainly provides a different perspective to that of today.