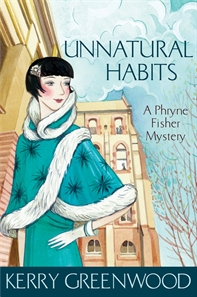 If you are going to the Abbotsford Convent you might like to celebrate by reading the latest Kerry Greenwood book in the Phryne Fisher series which has recently been turned into a television series greatly acclaimed not only here where one might expect it but also in France and the US.  Number 19 in the Phryne Fisher crime series came out in October 2012 and is called Unnatural Habits.  The Abbotsford Convent is a main character in this book.