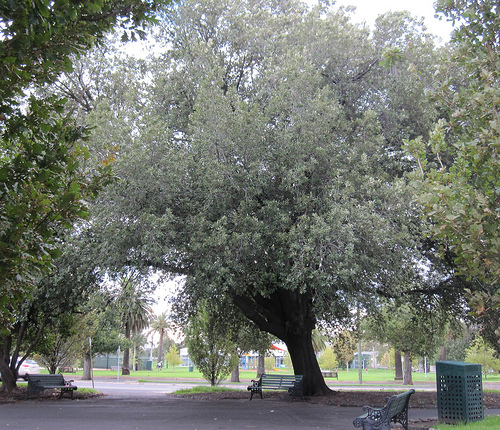 Raines Reserve 52/10/1, a photo by Collingwood Historical Society on Flickr.

This photo is part of the Flickr Friday photos 2012 group under the theme “green”.

Raines Reserve is the current name of a small reserve in Clifton Hill at the junction of Heidelberg Road and Queens Parade and leading to the former United Kingdom Hotel. It was called after Cr William Rain who was Mayor of Collingwood in 1904/5 and more properly should be called Rain’s Reserve but as time has passed the spelling has changed. Rain was a long term member of Collingwood Council and Chairman of the Council Public Works Committee as well as a Commissioner of the MMBW. An architect by profession he was born in Geelong but lived in Collingwood for most of his life. In parallel to his time on Collingwood Council he was also for a time a Councillor and Shire President for Dandenong.

Rain’s Reserve is not shown in Kearney, de Gruchy, or the MMBW maps featuring Collingwood but is on the 1921 map (go to Maps Online section of Collingwood Historical Society website). The Sands and McDougall directories need more research but because of the nature of the site that part of Collingwood is not always easy to find so we are not really sure when this Reserve came into being and when it was named.

The Collingwood Historical Society has one historical photo of the reserve. This photo represented below is probably dated between 1912 and 1917 because of the businesses shown. You can see that the layout of the Reserve has changed in recent times with the central pathway now going right through to the apex. 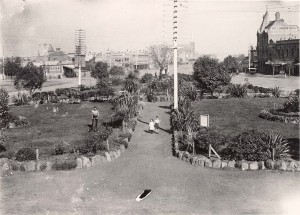 The holm oak or Quercus Ilex shown in the photograph at the top of the post is one of the few trees in the former City of Collingwood that is included in the National Trust Tree Register as being of Regional Significance. In another quirk of spelling the National Trust Register spells the name of the reserve as “Raine’s” and places the Reserve on the intersection of Queens Parade and Alexandra Parade. The Reserve is otherwise not named on Google maps.

If you have any further information about Raines Reserve or William Rain we would love to hear from you.