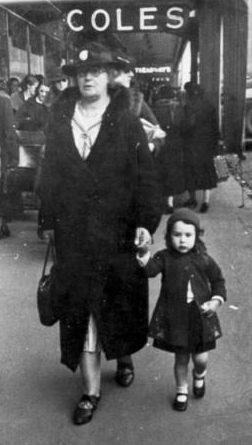 Collingwood’s oral history project started early in 1976 as part of the preparations for the celebrations of the centenary of the City of Collingwood (1876-1976).

The mayor at the time, Andrew McCutcheon, and his wife, Vivienne were actively involved in these plans, which also included the preparation of a history trail pamphlet, and an historical display in the Town Hall. Vivienne put out a community notice to find local people interested in tape recording the memories of their older friends, relatives and neighbours. Local resident Janet Taylor joined Vivienne in this endeavour. The first of these tapes were played as part of the Centenary display.

Over the next year or so a small informal group of local residents continued to meet and collect oral histories and developed the idea of publishing them in a book. The group became known as the Collingwood History Committee, with Janet Taylor as secretary. Janet remains an active member of the Collingwood Historical Society (2018).

The collection of oral histories was seen as a community project at a time when oral histories were just becoming of interest to professional historians. The priority was to interview older residents, but also a range of people who had grown up in, or lived much of their lives in, Collingwood, Abbotsford and Clifton Hill.

The interviews followed a simple set of prompts to explore everyday life in the local area as well as important events. The cassette tapes were transcribed by one of the group.

With financial support from Collingwood Council  In those days: Collingwood remembered was published in 1979 by Richmond Hill Press under the advice of John Curtain. It was his suggestion to publish it in a magazine style with soft cover as being most attractive for its main contributors. The book was based on interviews with 25 people, many in their 70s and 80s. The oldest were born in 1889, thirteen were born before 1900 and another nine before 1910. Sixteen were born locally and twenty were still living in the municipality when interviewed. The title, In those days, emerged from the contributors, almost all of whom naturally commenced their oral interview with that phrase.

The book In those days can be purchased or borrowed from Yarra Libraries, or downloaded from the CHS website:

Over the following years a small number of oral histories have continued to be collected by interested members of the historical society. From 1986 the history group became formally the Collingwood Historical Society Inc.

Three publications based on oral history interviews with local residents have been published by North Yarra Community Health (now known as CoHealth). These include a number of immigrant and refugee residents. The cassettes for at least the first two of these projects are stored at the Collingwood Library.

Another local project by Andrew Lindsay is Wrestling with an octopus: stories from the Collingwood Housing Estates (1992)