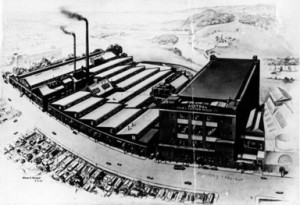 Yarra Falls Spinning Co, which later became Yarra Falls Ltd, built its first mill for spinning wool yarn on Johnston St., Abbotsford near the Yarra River in 1918 and its administrative complex facing Johnston St in 1919. The company became a leader of Australia’s textile industry. In 1922 a wool weaving mill was built at 80-110 Trenerry Cres and in 1928 the massive Austral Silk and Cotton Mills at 112 Trenerry Cres.

Yarra Falls Mills was established in the early 1900s as one of the major worsted and woollen yarn spinners to meet the growing demand of the nation for high quality knitwear and weaving yarns. Yarra Falls was a public company listed on the stock exchange until the 1970s when it was taken over by W R Carpenter and Co, and again in the 1980s by the Griffin group. Both companies continued to invest heavily in modern automated equipment to ensure they remained competitive in the market. The 1990s saw significant rationalisation of the total textile industry in Australia and other developed countries, and the acquisition of Yarra Falls by Australian Country Spinners in 1998. 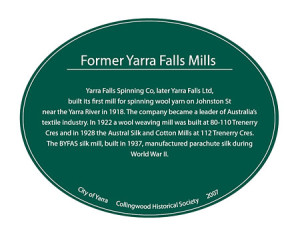 Life was not always peaceful in the mills. Yarra Falls Mills was the one of the sites of battle between textile employers and workers throughout the 1930s Depression. Janey Stone gives the following account: ‘It started in August 1932, when Victorian employers cut wages by 15%. This was in addition to the 10% across-the-board cut for all workers two years previously. Immediately 700 employees at Yarra Falls Spinning Mills, 500 of them female, went on strike. Following an offer to reduce the cut to 7.5% the union officials convinced the strikers to return to work pending further negotiations. Not long afterwards, at a mass meeting which consisted ‘largely of young women and girls and boys dressed in knickerbockers’, 1000 textile workers voted to strike again, electing a committee which sent speakers out to other mills to spread the strike… With 3,500 out in Melbourne there were too many to meet in Trades Hall, so ‘the strikers went to the Temperance Hall, the girls marching along Russell Street singing.’…Although forced to settle, they had achieved a partial victory in reducing the cut to 7.5%.

In the last two decades of the 20th century, these large industrial and mill buildings have gradually been decommissioned and recycled for light industrial, commercial or residential uses.

Mines, Frank, ‘A draft history of parachuting in australia up to the foundation of Sport parachuting in 1958’
https://www.apf.com.au/APF-Zone/APF-Information/History-of-the-APF/Draft-History-of-Parachuting-in-Australia/default.aspx