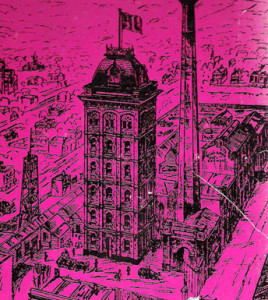 The Yorkshire brew tower has been a prominent Collingwood landmark for some 140 years and is of statewide significance both architecturally and as a remarkable survivor of Victoria’s 19th century brewing industry.

The Yorkshire Brewery was established in 1858 by John Wood on a two acre site near his Yorkshire Hotel on Wellington Street. He commenced operations in a timber building, using a 36-gallon copper. In 1875 his son, the engineer and architect James Wood, prepared drawings for the present complex, the foundation stone being laid in 1876. The most prominent feature of the complex was the multi-level polychrome brick tower with a large mansard roof described as being in the French Second Empire style. Access up the tower was supplied by a hydraulic lift (since removed), and water was supplied from Yan Yean. A large cellar was built at the rear of the tower with a capacity of 1000 hogs heads and a former 205 ft high chimney stack was described in 1890 as one of the most handsome in the colony. There was stabling for 26 horses.

The Yorkshire Brewery became a major Melbourne brewing enterprise. Prizes were obtained for ale and porter at the Melbourne Exhibition of 1888. The complex experienced numerous changes of ownership but maintained its identity in the early 20th  century. This period saw amalgamations of breweries in Melbourne and the Carlton & United group purchased the Yorkshire brewery in 1909. It was first used as a standby plant, then a cooperage.

In The Age (23 July 2004) George Smithwick, the sixth in a line of coopers that stretches back to 18th-century Ireland, reminisced that his father and grandfather made beer barrels at the Yorkshire Brewery. In the early 1950s Carlton & United changed their barrels from wood to steel, the cooperage closed and Smithwick’s father, Les, had to find another job. 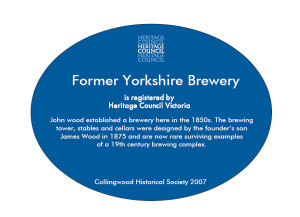 In 1987 the Yorkshire Brewery was assessed as of ‘profound architectural and historic significance at the state level’: a substantially intact large mid-Victorian brewing complex consisting of a brewing tower, brewery cellars and former stables, with additions. In 1990 it was classified by the National Trust and registered by the Historic Buildings Council as of state-wide significance.

Carlton & United subsequently sold the brewery. Since 1997 there have been a series of development proposals for the site. The initial proposals involved retaining the 1950s silos on the site for apartments. Subsequent proposals have involved demolishing the silos and building a high rise apartment block, plans which challenge the significant landmark status of the brew tower and the view lines to it. Meanwhile the site has remained abandoned for over a decade and has been vandalised, not only by squatters and graffitists. The roof of the heritage listed stables was removed without a permit by one developer who was fined $110,000 (Melbourne Yarra Leader 22 April 2002).

The brew tower remains one of the most striking structures in Collingwood. The community anxiously awaits a development that will respect and enhance its heritage significance.