This two roomed, 2.5 metre wide cottage was built at 130 Islington Street following a subdivision in the mid 1870s. Believed to be one of the smallest houses in Victoria, it is known locally as the Doll’s House because of its size. Rate books show that it was one of the smallest in the street and attracted the lowest rates, only a fraction more than those blocks that were land only. Despite its size this tiny dwelling was a home for several families for over a century.

It was first owned by Mrs Mary Barker (occupation, home duties), for ten years or so. James Peddie, a blacksmith, bought the house in about 1886 and lived there with his wife and young daughter, Lilly May. Lilly died at the age of six only a couple of years after moving into the house but the couple continued to live there until the early 20th century when they moved to Wellington Street. They let the house to a succession of tenants: Margaret Catlin, home duties; Sydney Andrewartha, a woodturner with two children; George Hirst, a labourer; Mrs Ellen Williams and then her daughter Mary Williams. There were usually three or four people living in this tiny house together. James Peddie eventually sold the house in the late 1920s to Mrs Emma Podger, who lived there with two other people for about fifteen years. The Jacksons, mother and son, then owned the house and lived there for nearly thirty years before the Education Department bought the property in 1978. 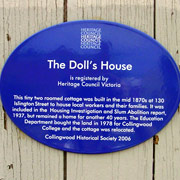 This part of Collingwood is largely industrial now; it was formerly a working class residential area. The residents were a mix of owner/occupiers and tenants, and were labourers, blacksmiths, wood choppers, factory workers and the like, just as the Doll’s House’s residents were.

Much of Collingwood, including this area, was commonly known as the Collingwood Flat, a topographical reference. The area became known as a ‘slum’ area and the Doll’s House rated a reference and photo in the Housing Investigation and Slum Abolition Board Report 1937. However, the house survived and was lived in for another forty years.

The house originally had a fireplace in the internal wall. The fireplace was removed sometime before the 1940s, probably to make space.

In the mid 1970s the houses in the streets surrounding the Doll’s House were demolished as Hoddle Street was widened and land cleared for the new Collingwood Education Centre. Because of its special interest the Doll’s House was not demolished by the Education Department and was left standing alone in Islington Street while Collingwood Council decided what to do with it. In 1978 it was rescued by local businessman Bob Neylon who moved it into his building equipment hire yard at 103 Wellington Street. He restored and furnished it and opened it to the public as ‘the smallest house in Australia’. When he died in 1984 the Council again wondered what to do with the cottage. Eventually it was dismantled and stored for some years at the Collingwood Council Depot in Walker Street Clifton Hill while a decision was made as to its future. It was eventually reconstructed in the Depot in 1991 and by 1995 was back in Collingwood at the corner of Cromwell Street and McCutcheon Way in the care of Collingwood College, not far from its original home.

It was cited by the National Trust in 1985 (File no. B2511) and was later registered by the Historic Buildings Council (VHR HO954), significant as the smallest extant house in Victoria.