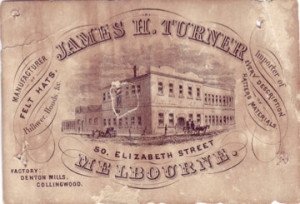 The Denton Hat Mills have long been a local landmark in Abbotsford, the imposing three-storeyed late Victorian factory with the main Italianate polychrome facade and chimney stack dominating Nicholson Street. The hat factory is of state and national significance as one of the largest and Australia’s first steam-powered hat factory. The mills have architectural significance given their association with the important Melbourne architect, William Pitt, who designed the Princess Theatre, Rialto and Olderfleet Buildings. Although the mill buildings were constructed in stages between 1881 and 1916, a uniform facade is presented to both Nicholson and Mollison street frontages.

James Hobson Turner, his wife Susannah, and James Miller, a rope manufacturer, purchased the land in June 1870. Councillor Turner from 1872 onwards then established a large workshop opposite his tannery in Nicholson Street. The hat factory was a further logical step following the skin washing and tanning, using raw materials of wool, rabbit fur and leather which were cleaned and treated on the premises. By 1877, a brick factory had been constructed on the site and Thomas Shelmerdine (the son of a Lancashire hat manufacturer), Thomas Davison and Robert Simon were the new manager-lessees, whilst Turner continued ownership. Business improved as the community came to accept locally manufactured hats rather than demanding imported hats. 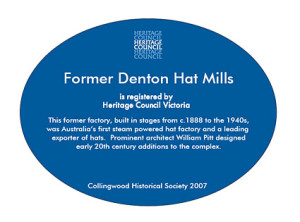 By 1879, the factory was owned by well-known businessman George Stevenson, of George and Leader Stevenson, merchants, importers and warehousemen. After originally being known as the Fayrefield Hat Factory, in 1880 the building became known as the Denton Hat Factory, perhaps after the town of Denton, near Manchester, which is known for its hat manufacturing industries. Advertisements of the time suggested Denton’s was Australia’s first felt hat factory, producing both soft and hard felt hats and being one of the few Victorian clothing factories using mechanised plant. In 1881, the new owners expanded the factory including the construction of the chimney stack. The factory rapidly expanded with the number of employees increasing from 12 in 1874, to 70 in 1876, 120 in 1883 and 208 in 1887, with a turnover reaching 30,000 pounds per year and processing of thousands of rabbit skins and hundreds of bales of wool annually. Edward Shaw was the mill manager and resided in a brick cottage beside the Nicholson Street complex.

By 1882, Shelmerdine had left to build Collingwood’s second hat factory in Trenerry Crescent, Abbotsford in the newly-subdivided Dight’s Paddock.

In 1887, the firm was restructured to enable the buy out of the existing hat manufacturing business of Patterson, Laing and Bruce, known as the London and Paris Hat Company and based in North Fitzroy. The company directors of Denton Hat Mills were George Stevenson, and John and George Bruce, with the Bruce brothers being large shareholders in the mills. John Bruce was president of the Softgoods Association, the Warehouseman’s Association, the YMCA and the Melbourne Hospital. Following John Bruce’s early death in 1901, George succeeded him as the chairman of Denton’s.

The imposing building remained a hat factory until 1971.

References
Allom Lovell & Associates, 1995, Summary Report on the Existing Conditions and Opinion of Probable Costs of the Joinery, Rooves & Structural Works to the Brush Fabrics Building.

Department of Planning and Housing and City of Collingwood, The Flat and The Hill: Conserving Old Collingwood.