Collingwood Council started in 1855 as the Municipality of East Collingwood, twenty years after the beginning of European colonisation of Melbourne. It grew to become the City of Collingwood in 1876 and continued under this name until 1994 when several municipalities were amalgamated to form the City of Yarra.

In 1853 fifteen residents concerned about problems apparent in the area formed a committee to press for local government. On 24 April 1855, the Municipal District of East Collingwood was gazetted and became one of the first municipalities in Melbourne. The area included what became the suburbs of Collingwood and Abbotsford. The area which was later called Clifton Hill was added within a few months when the local committee won inclusion within the East Collingwood boundaries of the hill north of Reilly Street (Alexandra Parade). This was despite objections from owners there. With its Crown lands leased by butchers and the Melbourne City Council bluestone quarry, the hill was a valuable acquisition and the municipality now covered 1155 acres (486 hectares).

John Pascoe Fawkner convened a meeting of householders and landowners and together with Thomas Hood and Richard Norton conducted the first election on 9 October 1855. The seven councillors met three days later and elected as chair Dr Francis Murphy who was a local resident and Member of the Legislative Council. In the early days there was a dearth of meeting places available. They first met in Smith Street, then John Hodgson proposed the use of the hall attached to the Studley Arms Hotel in Wellington Street as council chambers. In 1860 municipal offices were built in Johnston Street, adjoining the courthouse, and this building was to be the council chambers until the grand Collingwood Town Hall which remains today was finally built in the mid 1880s after arguments over siting and costs.

Council divided into factions and argued strenuously over street-making priorities, location of bridges, and the siting of municipal buildings and a marketplace. Protection for local industry became an axiom in Collingwood. The majority of councillors and members of Parliament were Protectionists and the increasingly industrialised suburb was regarded as the headquarters of the movement.

The 1890s Depression and the emergence of Labor politics

Council was dominated between 1885 and 1895 by builders, estate agents, tradesmen and publicans. Estate agent William Beazley was elected in 1887 and two years later was elected to the Legislative Assembly. (At this time a person could be simultaneously both a councillor and a Parliamentarian). An ardent Protectionist and radical liberal, he found common ground with the new Trades Hall Council. The newly formed Labor Party began increasing its Parliamentary representatives.

The 1890s Depression destroyed many of the gains made by the trade union movement in the 1880s as employers took advantage of workers’ desperation. The long-serving Member of the Legislative Assembly for Collingwood, George David Langridge, died in 1891, and typographer and unionist John Hancock was elected as a Member of Parliament in his place. His victory enthused the Trades Hall Council and workers glimpsed the possibility of political representation.

In the early twentieth century workers increasingly looked to Labor members for Parliamentary representation, and this gradually spread to Council elections. Council was

dominated by Labor members from 1923 but control was not so tight that members could not hold independent views on some matters. Harry Dummett, elected in 1930, was a declared independent and was excluded from committees and the mayorship year after year, until he finally joined the party. In 1935 the Australian Labor Party (ALP) central Committee refused to re-endorse four sitting Labor members after rowdy scenes in Council, and as a result the ALP only maintained a lead of eight to seven.

In the 20 years from 1935 to 1955 Councillors came from Labor backgrounds or were small businessmen wedded to Labor Party politics. In 1955 the Victorian Labor Party split, mainly on the position regarding communism. Collingwood Council in 1955 was divided evenly between the Cain Labor Party and the Australian Labor Party (anti-Communist) which later became the Democratic Labor Party or DLP, with independent Harry Dummett as odd man out. He was eventually persuaded to join the Labor Party (ALP).

In 1960 the ALP finally held all Collingwood Council seats. Then for an extraordinary 18 years there were no elections, as ALP councillors were elected unopposed.

The Collingwood community was changing, and more was required than ‘rates, roads and rubbish’. Decisions made by the Housing Commission, the Education Department and the MMBW were having a greater impact than local choices. The constantly unopposed elections tended towards an unresponsive council. There was an early sign of change with the election of Andrew McCutcheon in 1965, joined by Bruce Anderson and Caroline Hogg in 1970. In 1972 Frank Thompson, another progressive ALP member, was elected. This allowed the development of a reform group within Council, all ALP members. They were concerned to provide social services, support migrants, control housing development, consider urban renewal schemes and encourage public participation in Council decisions. In 1972 the Collingwood Residents Association was formed as a pressure group. Council joined local residents in the unsuccessful fight against the opening of the F19 (Eastern Freeway).

Council began expanding its field of influence, appointing the first social worker, Edith Morgan, in 1972. Keele St Child Care Centre was repaired, and five other centres established in the next 10 years. In 1976 Collingwood and Richmond Councils joined force to set up Carringbush Regional Library which, under the inspirational leadership of Peter Stansfield, provided a range of innovative services to the community which set the direction for Victorian public libraries for decades. There were increasing cooperative endeavours with Fitzroy and Richmond Councils.

Caroline Hogg (1970-1979) in consultation with Solange Shapiro (1974-1985) reminisces about this ‘exciting time’ to be a Collingwood councillor.

Council was dominated by Anglo-Saxon males for decades from 1855. However, in 1964 the first woman, Rita Jamieson, was elected and remained until her death in 1970, when she was replaced by Caroline Hogg, who would become the first woman mayor. More women followed; in 1980 Solange Shapiro was Mayor and Marion Miller Deputy Mayor. In the ten years from 1984 to 1993 there were five women Mayors.

Theo Sidiropoulos, Collingwood’s first Greek councillor, was initially elected in a by-election and confirmed in 1970. Other councillors of Greek background followed in the later 1970s.

Lisa Bellear elected in 1988 was the first Aboriginal councillor. In 1991 Duc-Dang Tran, of Vietnamese origins, was elected.

The rise of independents

In 1987 there was a complete spill because the number of wards was reduced from five to three, but ALP candidates won seven of the nine places. But by 1990 independents were in a majority with five independent councillors to four ALP.

The end of Collingwood Council

In 1991, the last ever Collingwood Council election, seven new councillors were elected. After 139 years the Collingwood Council came to an end when amalgamation was completed on 22 June 1994, and three commissioners were appointed to oversee the City of Yarra until democratically elected council resumed in 1996.

Notes from the CHS tour of Collingwood Town Hall:

Collingwood Notables database. Many councillors appear here, ranging from Sir Francis Murphy chairman of the first council to Andrew McCutcheon a councillor from the late 1960s to the early 1980s, who died in 2017. Search the database Collingwood Notable People using the word ‘councillor’ to find others. 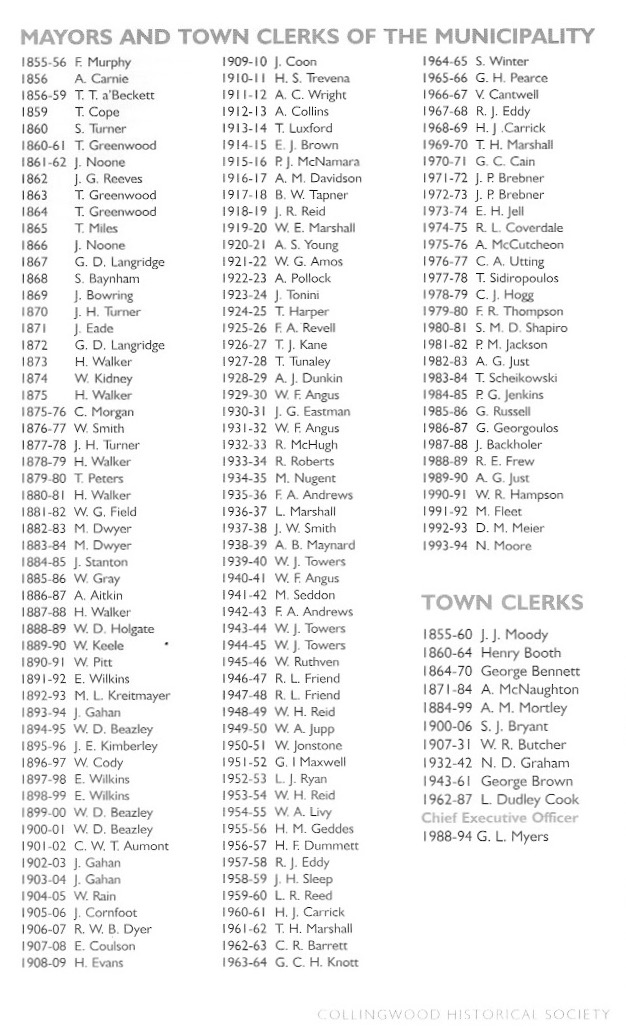