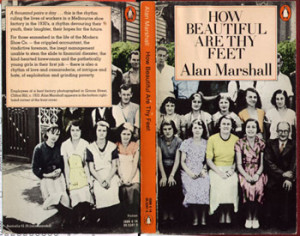 The former Trueform Boot factory, situated on the south east corner of Groom and Roseneath Streets, was one of many boot factories in the area. It is of particular interest as it was here that the well-known Australian writer Alan Marshall worked.

In the 19th century Collingwood became known as the capital of Australia’s boot and shoe manufacturing industry. At the start of the 1900s south-east Clifton Hill was a mix of houses, factories and paddocks. Boot and shoe factories developed in east Clifton Hill from the 1900s and there were a large number operating in the 1920s and 1930s. The last closed down in the 1970s.

The Sands and McDougall Directories list businesses in the area over the years. The first listing on the Groom Street frontage was the Pitman Shoe Company in 1917 (37-41 Groom St). In 1923 Halsey and Son, boot manufacturers, had arrived, to be replaced in 1924 by Trueform Boot and Shoe Co Pty Ltd. The Trueform Boot and Shoe Company were listed at 43 Groom Street until 1936, but by 1938 had gone into liquidation and had been replaced by A Pattison and Co., furniture manufacturers.

Alan Marshall worked as an accountant at the factory during the early 1930s Depression and vividly recorded life in the factory in his autobiographical novel How beautiful are thy feet. The book was first published in 1949 and refers to the factory as the ‘Modern Shoe Company’.

In How beautiful are thy feet, Alan Marshall described the manufacturing process and the hardship of the working conditions (1979, pp 19-20):

The clicking room comes first … they stand before specially prepared boards of soft wood and sweep their curved and pointed knives around the galvanised iron patterns placed on the skin … they stand side by side … they do not look up when you enter … they have to cut four hundred pairs a day at the Modern Shoe.

The machine room is an oven … the iron roof is just above your head … and the girls
with curved backs sitting in rows on old stools … the long benches and the black
machines like heathen idols hungry for sacrifice.

Ellen Don (born 1889) worked at Trueform for some 14 years. Her account of working there with Alan Marshall appears in In those days: Collingwood remembered. She started there aged 26 as a widow with two young children and became forelady. ‘It was a big strain on me being over girls that I’d worked with’. She remembered:

Depression time was the worst … you advertised for a girl and there’d be thirty or forty turn up at 7 o’clock in the morning at the door, pleading for a job. You’d have to sneak in through the back door so they wouldn’t see you’.

It was talking to Ellen that inspired Alan Marshall to write the novel.

Marshall, A 1979 How beautiful are thy feet, Penguin, Harmondsworth, UK.