Constructed to the design of renowned architect William Pitt over several decades from 1887, the Foy & Gibson factory complex still dominates the area in Collingwood bounded by Stanley, Wellington, Peel and Little Oxford Street. The factories provided goods for Foy & Gibson department stores and produced men’s clothing and shirts, ladies’ underclothing, millinery, furniture, hardware and bedding. Warehouses stored imported goods, and the complex was a major hub for home delivery, firstly with horse-drawn vehicles and later with motorized trucks. A major source of local employment, the Foy and Gibson factory complex employed around 2000 people in all stages of the production process, from spinning to despatch and delivery.

Mark Foy worked in Ireland as a draper before immigrating to Victoria in 1858. He was lured to the goldfields and lived and worked around the Bendigo area until he set up a draper’s store in Smith Street in 1870.  By 1875 the business occupied three shops and six by 1880.  In March 1883, having decided to retire and travel to Ireland, Foy brought in William Gibson as a partner and settled his share of the business on his son Francis.  Mark Foy died in San Francisco in 1884 on this trip. Around this time, Francis and William severed their business relationship, with the name Foy and Gibson staying with William Gibson in Melbourne, while Francis and his siblings relocated business to Sydney where they set up the business Mark Foy which they named for their father. 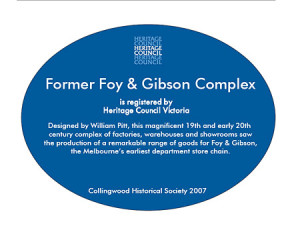 William Gibson was born in April 1847 to a clothier, John Gibson and his wife Janet in Falkirk, Stirling, a manufacturing town near Edinburgh which had risen to significance in the industrial revolution.  By the time of his marriage in 1881, Gibson was living in Glasgow where he had risen to be cashier in the firm of Mann, Byars and Co., having been employed there since boyhood.  The firm Mann, Byars and Co., merchants and manufacturers, was established in Glasgow in 1847 and in its heyday occupied a large area in Glasgow with a retail outlet and warehouses for its clothing and household goods, much of which was produced in the firm’s adjacent factories. William Gibson resigned from Mann, Byars and Co. and left for Australia in 1882 with wife and young son William.

Overseas buying was seminal to the development of the business and Gibson sent buyers to Glasgow and later London, himself travelling backwards and forwards on business trips most years.  On one such trip in 1889 a tour of the Bon Marche department store in Paris resulted in the transformation of what was at that stage a drapers and adjacent hardware store into one of Melbourne’s earliest department stores.  Department stores were distinguished by the full range of products that were provided, by set prices which were clearly labelled, by seasonal sales and by catalogues of their products.  However, Gibson went one better than the Bon Marche concept.  He became a ‘universal provider’ – from around 1897 setting up factories to manufacture the goods as well as selling them.

The retail business expanded in Gibson’s lifetime from Collingwood and Fitzroy to include retail outlets in Perth (1895), Prahran (1902), Brisbane (1903), and Adelaide (1907). In the 1930s the Orient Hotel on the corner of Swanston and Bourke Street Melbourne was demolished to make way for the city store.

The 1899 MMBW maps already show Foy & Gibson stables and factories particularly in the area towards Peel Street.  By the 1906 sketch in Advance Australia, the monolithic nature of the buildings gradually taking over the small workers’ cottages to be seen in the right of the sketch is apparent as are the new mill and engine-works.  It is estimated that 200 such workers’ cottages were demolished by 1912 to make way for Foy & Gibson construction.  The ‘panoramic view of 2 miles of mills’ to be found in the 1923 catalogue shows the full expansion of the business.

Most buildings in this complex are on Heritage Victoria Registers of significance for the architectural uniformity as well as for the early use of steam and electric power.  In 2007 these buildings are put to many uses from residential to Collingwood Alternative School to offices and light industrial.  Sadly, little remains of the vibrant shopping centre of Smith Street.  The women’s store on the west side of Smith St. survives as does the underground tunnel connecting the two shops – well in advance of its day – while on the east, Collingwood, side of the street, only a few remnants remain.

Foy & Gibson was a significant factor in the history of Collingwood from the early shops of Mark Foy to the takeover by Cox Brothers in 1955 and the final liquidation of the firm in 1968.  Collingwood echoed to the sound of the start and finishing of Foy & Gibson shifts for decades.

Department of Planning & Housing and City of Collingwood, 1991, The Flat and the Hill: conserving old Collingwood.