This simple double storeyed red brick building has a colourful past.

It was originally built by William Yates for his Yates Boot Factory in 1884. Collingwood was the home of Melbourne’s boot and shoe trade for many years. In 1927 the long-established British firm of organ builders, Hill, Norman and Beard, took over the building to use as an organ factory. It needed the site to handle a large number of orders for church organs, including the prestigious new organ for the Melbourne Town Hall. The Town Hall organ was almost entirely constructed by Australian artisans at Clifton Hill out of Californian redwood. The organ, described as a “masterpiece of tonal architecture”, was the largest concert organ built in the British Empire between the wars. The firm also built organs for St Paul’s Cathedral in Melbourne, St Andrew’s Cathedral in Sydney and St John’s Cathedral in Brisbane. 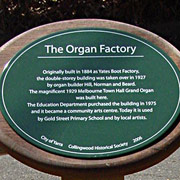 Since 1974 the Organ Factory has been home to an amazing range of activities. It has been used as a Community Education Office and by local artists and numerous local theatre and recreation groups. It has also been the home of yoga, self defence and meditation classes, the Flying Bookroom Theatre Company, an experimental music centre, Fringe Festival productions, and the Bushwahzee Band. New Theatre became tenants in 1976 and remained the principal user of the upstairs theatre space until 2000.

Today the Organ Factory is administered by Gold Street Primary School and is used for classes and the after school care program. Local artists hire some rooms as studios.

The Organ factory has been recorded by the National Trust (B4969).