The distinctive buildings of the Alma Wool Scouring complex represent the largest surviving example of the local fellmongering industry, with the basement arcades of the former woolshed on the river frontage being of particular note. The buildings represent the earliest substantially intact industrial complex in Collingwood.

Peter Nettleton established the wool scouring works in 1861, building his bluestone villa on the premises, as was common practice at the time. Peter Nettleton was Collingwood’s best known fellmonger with a reputation for being a man of local political influence, being a trustee to various building societies and board member of the Bank of Victoria. In 1870, Nettleton’s fellmongery was cleaning 3,000 sheepskins per week. The fellmongery and woolwashing process involved the collection of sheepskins from the slaughter yards, which were then soaked in the Yarra River for several days, generally upon a pier-like timber framework extending into the river. The sheepskins were then placed in a ‘sweating-house’ for a few days until they decomposed sufficiently to allow the wool to be peeled off easily. The wool was then scoured (soaked) in hot water with soap and soda, rinsed in the Yarra River, dried and packed for export. A great quantity of animal remains were disposed of into the river creating river pollution and air pollution, with many complaints about the noxious odours.

Peter Nettleton donated some land to assist in the building of the Victoria Street Bridge in 1882. Nettleton died in 1901, and in 1917 the works passed to James Schofield Pty Ltd. In 1920, the Alma Wool Scouring Company took over, with operations ceasing on the site in 1980. 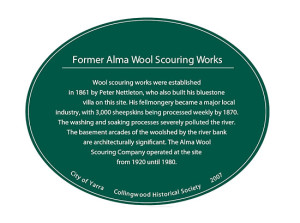 Department of Planning & Housing and City of Collingwood, 1991, The flat and the hill: conserving old Collingwood .