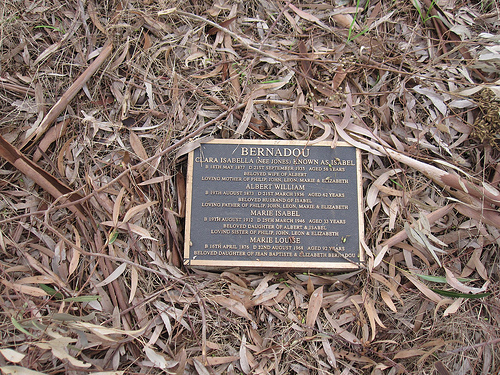 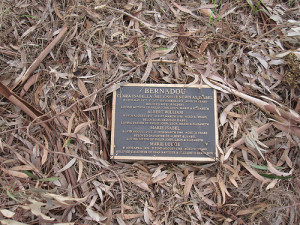 Bernadou grave at Boroondara Cemetery 52/12/2, a photo by Collingwood Historical Society on Flickr.

This photo is one of the Collingwood Historical Society’s contributions to the Flickr Friday Photos theme of “Cemeteries”.

As stated in the previous post, the area of Collingwood had no cemetery of its own so its residents tend to be buried either in Melbourne General Cemetery in neighbouring Carlton or in Boroondara Cemetery up the hill in Kew.

Marie Louise Bernadou is an example of someone with a Collingwood connection who is buried in Kew. As can be seen from the plaque she is buried her with her brother and sister-in-law and some of their family in the Church of England section of the cemetery. Her parents, Jean-Baptiste and Elizabeth, are also buried in the cemetery but in the Baptist section.

Marie Louise lived as a child with her French carpenter father and his English wife in Mason Street Collingwood. She won a scholarship to the Presbyterian Ladies College and after matriculating entered the University of Melbourne and graduated in 1897 with first class honours. Her graduation photo is shown below.

Marie Louise worked as a governess and a Matriculation coach and taught French at King’s College in North Terrace, Clifton Hill. Later she completed a Diploma of Education and joined the Education Department. There is further information about Marie Louise in the Collingwood Historical Society history of schools, Bitter Roots, Sweet Fruit.