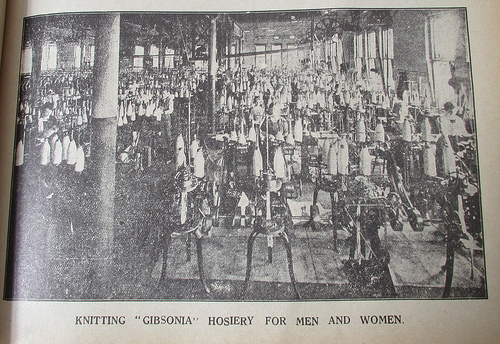 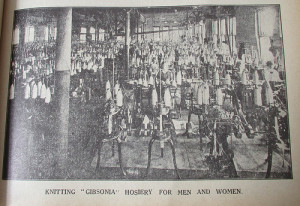 1923 Gibsonia hosiery factory 52/1/1, a photo by Collingwood Historical Society on Flickr.This illustration is taken from the 1923 Foy & Gibson catalogue and shows the interior of the Gibsonia hosiery mill in Oxford Street Collingwood. Foy & Gibson, celebrated for its “2  miles of mills” dominated the Collingwood landscape and Collingwood life for decades.  Its buildings, now mainly converted to residential use, still dominate the Collingwood skyline. Over the decades many, many socks for girls, boys, and men would have been produced here as well as hosiery for ladies’ wear.

The factories provided goods for Foy & Gibson department stores and produced men’s clothing and shirts, ladies’ underclothing, millinery, furniture, hardware and bedding. Warehouses stored imported goods, and the complex was a major hub for home delivery, firstly with horse-drawn vehicles and later with motorized trucks. A major source of local employment, the Foy and Gibson factory complex employed around 2000 people in all stages of the production process, from spinning to despatch and delivery.

For more information about Foy and Gibson check the website here.

This photo was taken by the Collingwood Historical Society for the Flickr Friday Photo Challenge under the weekly theme of “Socks”.