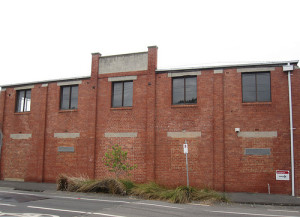 The former Trueform Boot factory, situated on the south east corner of Groom and Roseneath Streets Clifton Hill, was one of many boot factories in the area. It is of particular interest as it was here that the well-known Australian writer Alan Marshall worked.

In the 19th century Collingwood became known as the capital of Australia’s boot and shoe manufacturing industry. At the start of the 1900s south-east Clifton Hill was a mix of houses, factories and paddocks. Boot and shoe factories developed in east Clifton Hill from the 1900s and there were a large number operating in the 1920s and 1930s. The last closed down in the 1970s.

The Sands and McDougall Directories list businesses in the area over the years. The first listing on the Groom Street frontage was the Pitman Shoe Company in 1917 (37-41 Groom St). In 1923 Halsey and Son, boot manufacturers, had arrived, to be replaced in 1924 by Trueform Boot and Shoe Co Pty Ltd. The Trueform Boot and Shoe Company were listed at 43 Groom Street until 1936, but by 1938 had gone into liquidation and had been replaced by A Pattison and Co., furniture manufacturers.
This photo is one of the Collingwood Historical Society’s contributions to the Flickr Friday Photos 2012 challenge under the theme of Shoes.

Alan Marshall worked as an accountant at the factory during the early 1930s Depression and vividly recorded life in the factory in his autobiographical novel How beautiful are thy feet. The book was first published in 1949 and refers to the factory as the ‘Modern Shoe Company’.