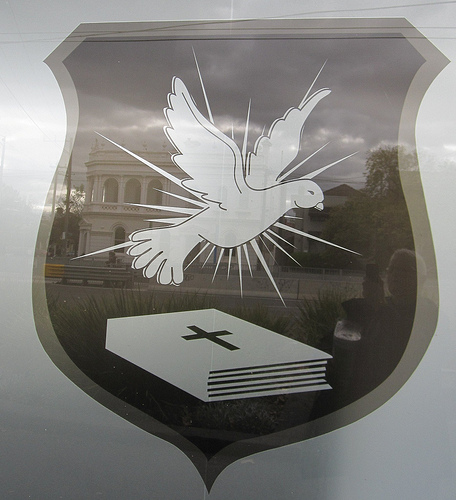 This photograph is submitted by the Collingwood Historical Society as part of the Flickr Friday Photos 2012 challenge under the theme of windows.

The window is a detail of one of a number of similar windows on the Queens Parade frontage of former St John’s Hall on the corner of Wellington Street. Its exact location is clearly identified by the image in the photograph of the former National Bank building on the opposite corner in North Fitzroy.

The foundation stone for the St John’s Catholic Parish Hall was laid by Archbishop Daniel Mannix on 2 September 1917. It replaced four shops which had been between the school and the corner and was opened on 18 April 1918 by the Apostolic Delegate, Archbishop Caltaneo.

That same year yhe premises started life as an early silent movie theatre operated by Robert McLeish who also operated the Northcote, the Austral in Johnston Street Collingwood and the Rivoli in Camberwell. The Clifton cinema was also operated by Hoyts, World Film Distributors and Cinema Italia over the years until it finally closed as a cinema in 1983. After that time it also operated as the Clifton Dance Studio but the hall section of the building was demolished in 1999 and the space was used to provide extra space including a playground for the school.