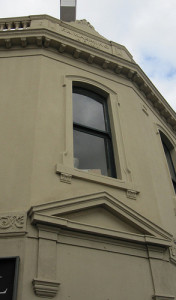 This photograph is submitted by the Collingwood Historical Society as part of the Flickr Friday Photos 2012 challenge under the theme of “windows”.

The Clifton Hill Hotel prominently situated on the corner of Queens Parade and Wellington Street Clifton has connections to the other two photos in this theme. The hotel which is currently opposite the former St John’s Parish Hall was built in 1884 by Frederick Warming whose name can be seen on the parapet above the corner window.

Warming had been the publican of the previous Clifton Hill Hotel which operated a couple of doors to the east from 1872 until 1884 when it was leased to the police after Warming opened his new hotel. The hotel operated in the same location under the name Daniel O’Connell from 1869 to 1871. The site of the hotel before moving to the corner location was probably 105 Queens Parade which was later the residence and rooms of surgeon, J. Forbes Mackenzie.