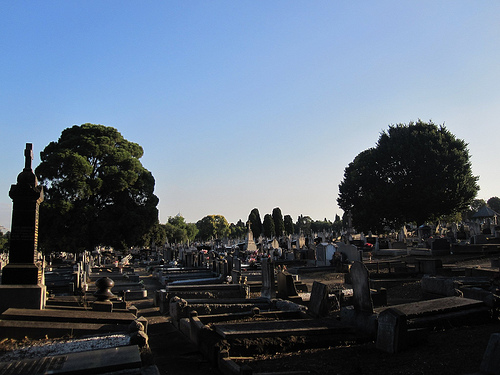 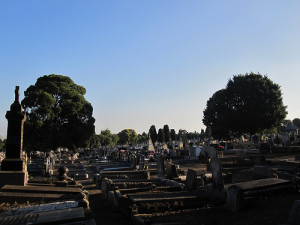 This photo is part of the Flickr Friday Photo group under the theme of “Cemeteries”.

The municipality of Collingwood does not have a cemetery within its boundaries. As a result of this those connected with Collingwood are most commonly buried in either the Melbourne General Cemetery in neighbouring Carlton to the west or at the Boroondara Cemetery to the east in Kew.

The photograph shows the Roman Catholic section at the north of the Melbourne General Cemetery. Unfortunately the cemetery website is currently “under development” so we can’t show any specific graves with Collingwood connections. But we do know that there were Catholics in Collingwood from early days as is evidenced by the early establishment of St Joseph’s in Otter Street. A number of hoteliers were Catholic and some had memorial glass in St Joseph’s. Most likely they would have been buried here.

One interesting Collingwood character whom we do know to be buried here is Eliza “Granny” Foster who probably staked John Wren when he first set up the Tote. She certainly owned the property. When she died in July 1913, Wren’s refusal to accept her estate made headlines. “Granny” Foster died in Hodgkinson Street Clifton Hill and was buried in Melbourne General Cemetery.